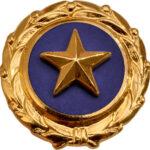 A gold star represents a son or daughter who died while serving in the United States Armed Forces.

What do people do?

American Gold Star Mothers, Inc. is an organization of mothers whose sons or daughters served and died while serving their nation in times of war or conflict. It organizes major events that take place on or around Gold Star Mother’s Day each year. Previous activities included a Gold Star flower wreath laying service, as well as an afternoon tour of President Lincoln’s cottage in Washington DC.

The last Sunday in September is also Parents of Fallen Military Sons and Daughters Day in New Jersey. This day is a tribute to all parents whose children died as a result of their service with the United States Armed Forces. It commemorates the contributions, commitments and sacrifices made by those parents individually and through the American Gold Star Mothers, Inc.

Gold Star Mother’s Day is not a designated public holiday in the United States so public life is not affected.

The name Gold Star Mothers was derived from the custom of military families who put a service flag near their front window. The flag featured a star for each family member serving in their country – living members were denoted in blue but gold stars honored family members who were killed while in duty. In 1918 President Woodrow Wilson approved the wearing of black arm bands bearing a gilt star by those who had a family member who died in the military service to the United States. This distinguished them from the blue stars, representing a family member presently serving in the armed forces.

American Gold Star Mothers, Inc. was incorporated in 1929, obtaining a federal charter from the US Congress. It began with 25 mothers living in the Washington DC area and soon expanded to include affiliated groups throughout the nation. On June 23, 1936, a joint congressional resolution designated the last Sunday in September as Gold Star Mother’s Day, a holiday that has been observed each year by a presidential proclamation.

A gold star symbolizes a family member who died in the line of duty while serving the United States Armed Forces.  It may be seen on a service flag or in the form of a pin, which is worn by Gold Star mothers. The pin is not limited to mothers and it is awarded by the US Department of Defense.